Hubby and I went with our son to PA on Sunday to help him finish setting up his apartment. He will be living about 140 miles from us. We left Sunday morning around 9 a.m. and encountered absolutely no traffic. The entire trip took just over 2 hours. We crossed two bridges and traveled in 3 states. Wonderful! (Please note that the speed limits range from 50 to 70 so this is just about right).
We went food shopping with our son so that he could stock his kitchen and refrigerator. Then we helped him continue to empty moving boxes and waited for his replacement furniture. When we were in PA over a week ago, his new bedroom furniture was delivered by a crew that was less than careful. The furniture was scratched and missing parts. He was quite disappointed. A visit to the local store had a replacement delivery scheduled for Sunday. Well they brought a whole new bedroom set (he needed only the dresser, one bedside table, and bunky board replaced and the bed slats that never came in the first delivery). What they didn't bring this time were the bunky board and the bed slats... the latter didn't come either time and this is a platform bed so the mattress sits on those 14 slats. How in the world did they think that would work? Hubby and I went to the local store to complain again while our son waited at his apartment for the delivery crew to return with a possible solution. This delivery crew had promised to bring temporary expansion bed slats so that he could at least sleep on the bed. The temporary bed slats came and he used the bunky board that still needs to be replaced. He can sleep on his bed and he is supposed to get yet another delivery in two weeks. He started a new job on Monday and can't take days off for a delivery so he needed to schedule it on a weekend.

Now after the long day of organizing the three of us went out to dinner at a local restaurant. Our son just moved into a planned community and there are a bunch of restaurants within walking distance. This park-like setting was just outside the entrance to our restaurant. 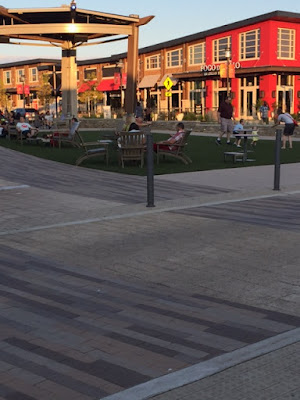 Isn't this a great fire pit? 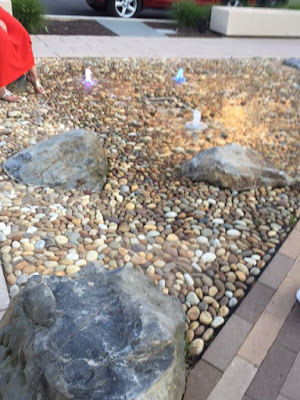 Here is the street that is right outside his apartment building. 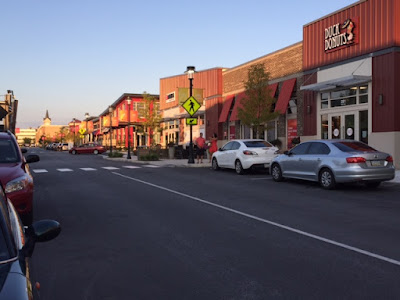 The building with the spire is the local supermarket. 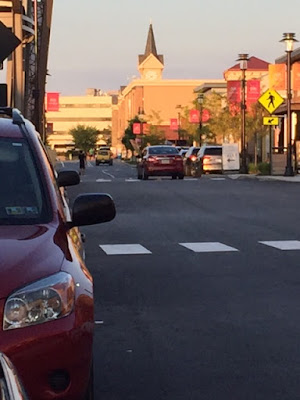 After dinner, Hubby and I started the drive home around 8 pm. We expected to get home between 10 and 11 pm. Well that didn't happen. We had little to no traffic all the way through PA and not much on the New Jersey Turnpike (I95) until we approached the Goethals Bridge. Now Hubby and I live on Long Island, NY. You must go over a bridge in order to get off the Island (or take a ferry to Connecticut). The Goethals Bridge leads from NJ to Staten Island, NY which you can then drive across to the Verrazano Narrows Bridge which gets you to Long Island. As we approached the exit to the Goethals bridge we encountered standstill traffic. We sat in the exit lane for over an hour until Hubby got fed up and decided to try another route. (Note that my two phone apps continued to tell me that home was only 1.5 hours away even after an hour of sitting at this exit but they also said that the alternate routes were even longer.) Now our alternate route was to drive North of Manhattan (we were South of it) to the George Washington Bridge, then turn East to the Throgs Neck Bridge onto Long Island. We stopped at a rest-stop right before the GW bridge, because by now we were on the road for 3.5 hours. There was traffic leading to the GW bridge, but at least it kept moving even though it was slow. Our journey home finally ended at 1 am, 5 hours  (and many tolls) after leaving our son in PA. If you do the math.....140 miles (more because of our detour) in 5 hours means we averaged 28 miles per hour. Really?! Ugh.

The moral of this story is to think twice before moving to a home on an island. Hubby and I grew up on Long Island and it has always been a hassle to get off and on when traveling by car. We don't plan on spending our retirement here for a variety of reasons. I certainly won't miss the traffic, but that time is still several years away.