A tree grows on Long Island

Many people have heard of the novel A Tree Grows in Brooklyn by Betty Smith. It was also made into a movie. Did you know that Brooklyn, New York is actually on Long Island? It is also known as Kings County. Three other counties are on Long Island: Queens, Nassau and Suffolk. Kings and Queens are considered part of New York City while those of us who live in either Nassau or Suffolk consider ourselves Long Islanders. Those who live in Brooklyn and Queens are New Yawkers. As you can see below Suffolk county (orange) makes up most of LI with Nassau county (yellow) as the second largest county. It is about a 2 hour drive from the Nassau/Suffolk border to the eastern tip of Long Island. Just a little geography lesson there. 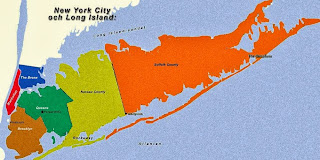 Below is "Through the Woods" by Little House Needleworks. I have managed to stitch one little tree so far, hence the name of today's blog post. 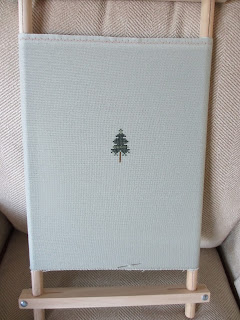 The fabric is 28 count linen and the color is somewhat darker than the picture shows. It is not the exact fabric recommended by the pattern.
My second WIP is my own design: "Winter Angel". This is the first angel of the four seasons that I have planned. When finished, the chart will be available on this site. 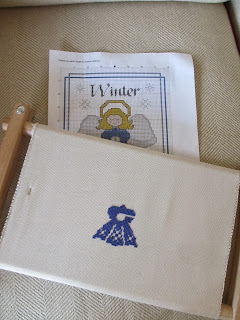 The fabric is a wonderful feeling 28-count linen in a mushroom color. Unfortunately, I did not make note of the manufacturer when I bought it, but I made sure to buy enough to stitch all four angels.
That is what is up stitching-wise right now.
Thanks for stopping by!
﻿
Posted by CathieJ