A touch of Hollywood stitching

A couple of weekends ago, Hubby and I braved the cold and rain to drive to a local outlet mall an hour away from our home. We really didn't need to do any shopping, (though I did find a dress to wear to my daughter's shower and a nice top for work or date night).
I wanted to see the following exhibit of costumes and clothing from..... 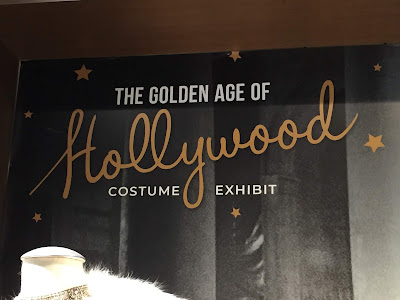 This unusual costume was worn by Doris Day in "Glass Bottom Boat" in 1966. 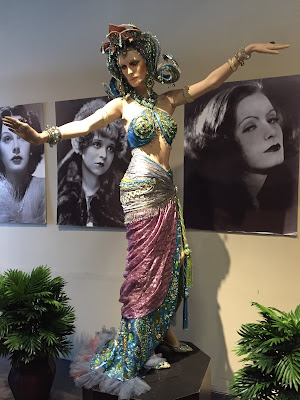 This was worn by Debbie Reynolds in "The Unsinkable Molly Brown". Look how tiny that waist is! 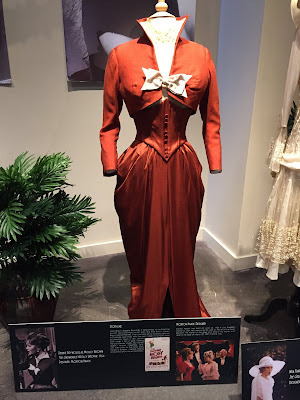 Below is a dress from the 1920's that belonged to Clara Bow. It looks very fragile, but is still quite pretty. 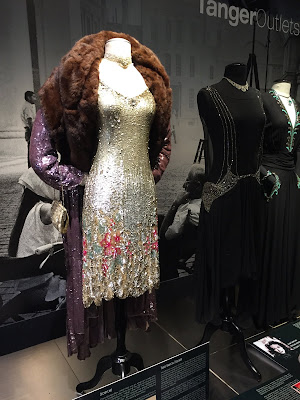 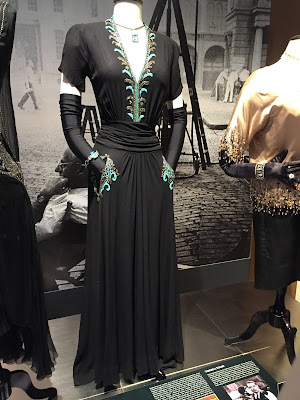 Judy Garland wore this outfit in the movie "Babes on Broadway" in the 1940's. Again, look at how small the waist is. 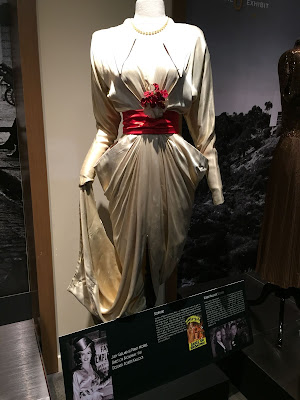 Ginger Rodgers and Fred Astaire wore the outfits below in different movies. The brown dress has pretty detailing. 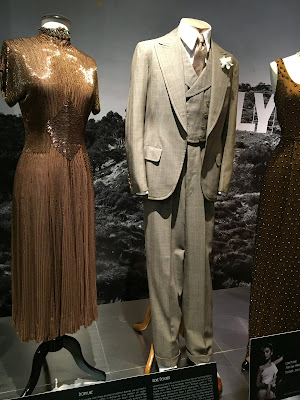 This red dress was a personal gown of Elizabeth Taylor from the 1970's designed by Halston. What a timeless look. 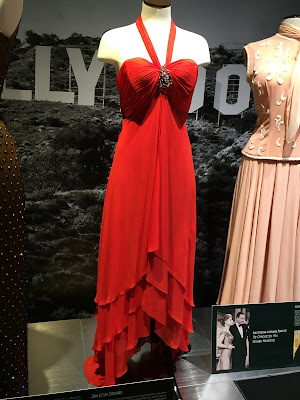 Tallulah Bankhead wore this over-the-top costume as Catherine the Great in "A Royal Scandal" in 1945. It is sad to see that the velvet is no longer in good shape in places. 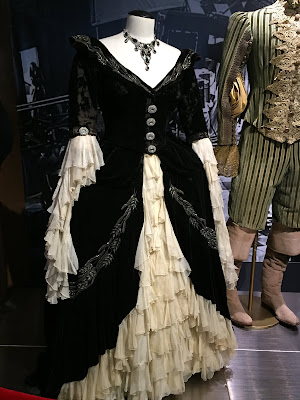 Even more over-the-top is the costume for "Marie Antionette" from 1938. The actress who wore it was Norma Shearer. 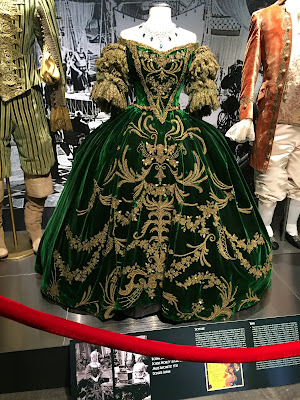 Joan Fontaine wore this beautiful gold creation in "Frenchman's Creek" in 1944. Zoom in to see the amazing swirls in the gold fabric. 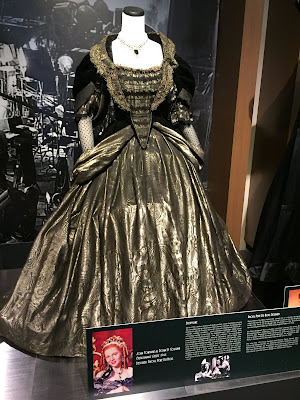 Isn't this black creation stunning? It was worn by Rita Hayworth in "Strawberry Blonde". 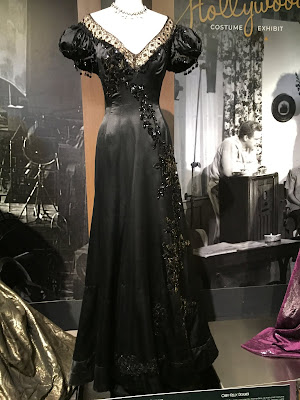 This gold gown is a reproduction of one worn by Grace Kelly in "To Catch a Thief". Edith Head had to design the neckline to showcase the jewels. 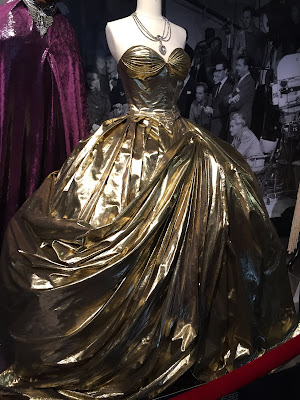 The skimpy creation below was worn by Lana Turner in "The Prodigal". The fringe is totally beaded. 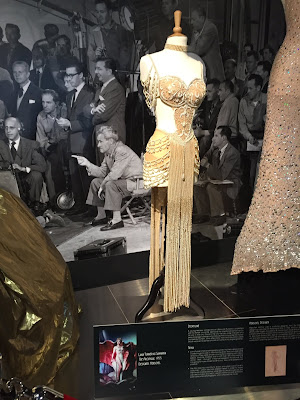 This dress was worn by Mira Sorvino portraying Marilyn Monroe. The elaborate duo to the right are from the movie "The Slipper and the Rose: A Story of Cinderella" from 1976 with Richard Chamberlain. 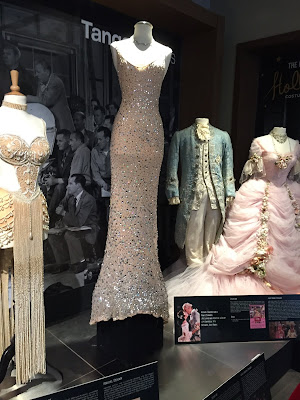 :
Do you recognize this outfit? It is the school-girl clothes of "Gigi"! Oh how much fun to see this outfit worn by Leslie Caron in 1958. Again, can you believe that small waist. 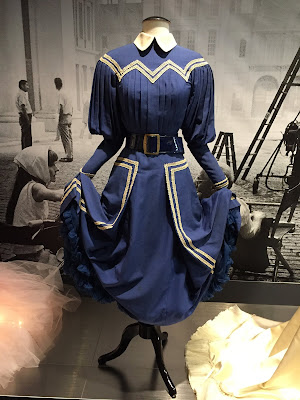 The gown below is from the same movie. I love the music from that movie. My mom had the album and it was played often when I was a little girl. 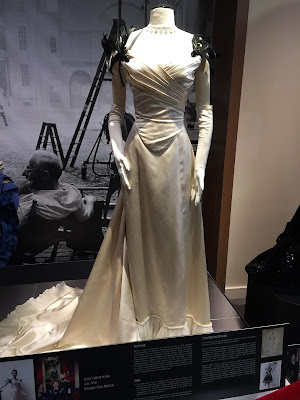 This gorgeous gown was worn by Mae West in "Every Day's a Holiday" in 1937. 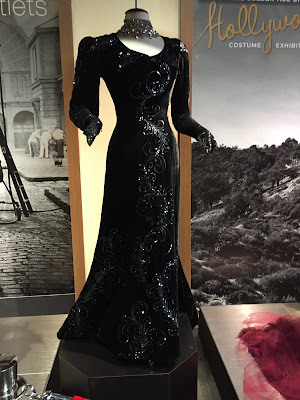 Who can forget Clark Gable in "Gone With the Wind". 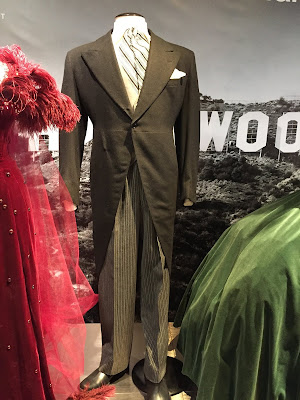 Do you remember the "curtain dress" from that same movie. This was worn by  Vivian Leigh in 1939. Trust me that she was a small lady. This gown goes to the ground and I could see over the top. I am only 5'2" tall myself. 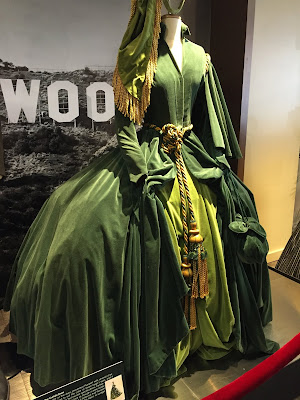 Ava Gardner was even smaller when she wore this beautiful dress in "The Great Sinner" in 1949. I felt like a giant near it. I don't think my thigh would fit in that waist. 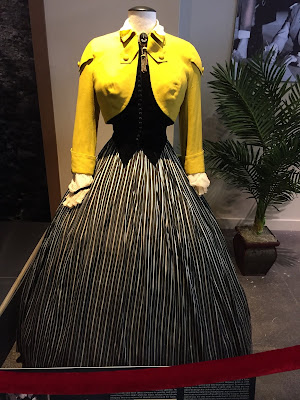 This is a beautifully embroidered dress that was worn by Jeanette McDonald in the 1942 movie "I Married an Angel". 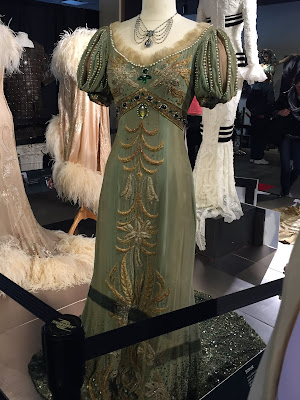 Below is a bathing suit worn by Esther Williams in "Easy to Love" in 1953. Do you see the tease behind it? 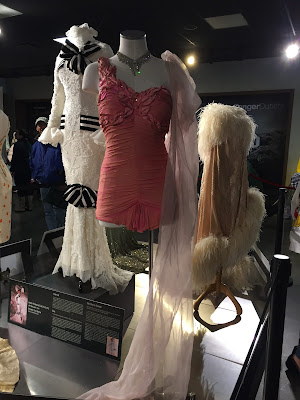 Here it is! This is one of the outfits worn by Audrey Hepburn as Eliza Doolittle in "My Fair Lady". Another movie whose music brings back childhood memories. I love this movie. It is amazing to see the intricate detailing on this dress. Zoom in. 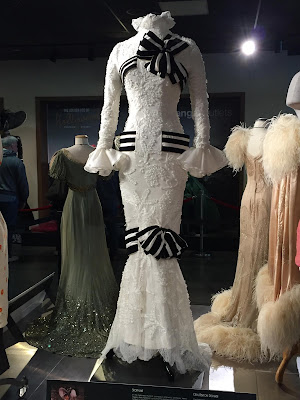 There were a few other outfits that I didn't photograph. Although I recognized almost all of the actors/actresses, I wasn't familiar with all of the movies. It was a small exhibit, but so much fun.

Hubby kept commenting about how much larger people are now. Somehow I think that is partially true, but that even current female actors still strive to be very small. I also know that sizing of garments has changed radically since I was younger, which is why my daughter often wears a 0 or 00, when she looks like at 2 or 4 to me. I don't think I was ever as small as she is, but I weighed about the same and usually wore 6 when I was her age. Never the less, I was so glad that we were able to get to see this exhibit. I hope you enjoyed the pictures.