I finished Santa on Saturday. Isn't he fantastic? 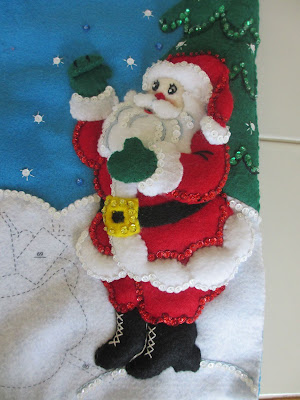 I am so glad to have him done. Now I can move on to his sack of toys which goes in between Santa and the Snowman. 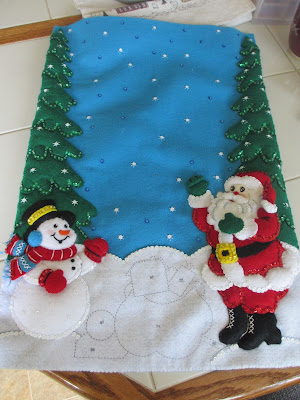 Of course then there are 25 mittens and stockings to work on. I don't really think this will be finished for use this year. Especially as I have another special project that I want to work on. Unfortunately, I won't be able to share that one at all until it is finished as I want it to be a surprise for the recipient who I know reads my blog.
Saturday started and ended with two different mysteries. First, I went outside to pick up the daily newspaper and noticed that our garage door was open. I thought I had closed it when I returned home the night before. I went over to it and pushed the button to close it and nothing happened. I went inside and told Hubby about it. We had experienced some bad thunderstorms the night before and he thought that maybe we had either had a power outage or power surge that automatically opened the garage door. It was probably the latter as all of our clocks were still on time which would not have happened with an outage. Hubby remembered a button to reset the opener and it worked. Thank goodness.
Then last night at around 9:30 pm our fire-alarms throughout the house started to go off. They only rang for no more than a second or two, but long enough that Hubby had to check each and every one. We still don't know why this happened. I think it is time to replace all of the batteries. All of our alarms are hard-wired, but they have back-up batteries that should be replaced once a year. We usually do this in April, but we didn't this year. There are two that are on cathedral ceilings which make for some scary tall ladder stretching to get to. I am much too short to reach them (and very afraid of heights). Hubby can just barely reach them....he is not too fond of heights either. He is usually somewhat shaky after he replaces those two batteries. I think this will have to be attempted today though.

I have also been working on the next Operation Gratitude Scarf as well as my Breeze Infinity Scarf. You can see both of them below. 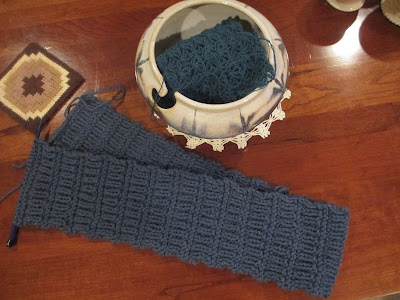 I am hoping to finish the donation scarf by Tuesday so I can hand it in at my stitching group.
I decided to continue reading An English Ghost Story by Kim Newman. 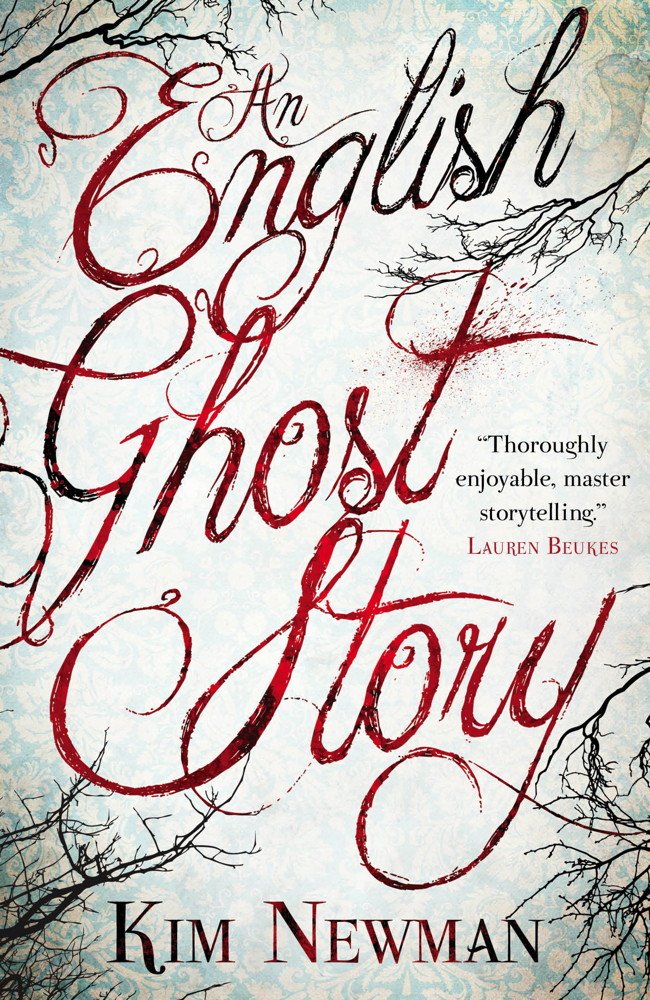 I can't say that I love this book, but it did get more interesting once I got further along in the story. I am currently at a part of the story that I am once again not enjoying. It is a little too dark and gloomy for me with too much character angst.

I am joining Kathy for some Slow Sunday Stitching. I will be working on the Advent Calendar today. Pop on over to her site to see what other bloggers are stitching.