Thanksgiving started with a beep. You know the kind....1:15 in the morning......beep.....wait a little......beep........beep. Yes, the dreaded smoke alarm battery decided to go bad at 1:15 a.m. on Thanksgiving. Our smoke alarms are hard-wired with a battery back-up. The latter causes much angst. Why, you ask? Well, two of those smoke alarms are on vaulted ceilings. One is in the master bedroom and the other is at the top of the staircase above the landing. Not good places for people who are afraid of heights.

The smoke alarm that decided to beep at 1:15 was our bedroom. You can see it at the top of the photo above the bathroom door. 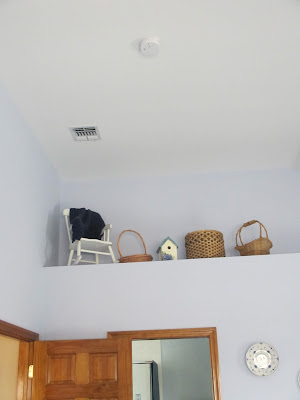 It woke me up. So I woke up Hubby, who went out to the garage to get the Little Giant ladder. If Hubby stands on the next to last rung from the top he can just reach the alarm. He can't hold on to anything when he is reaching. He gets this alarm down, puts in the new battery....beep.....beep. Turns out that I managed to find the oldest battery in the drawer that expired in 2014. Down to the basement I go to find one that expires in 2018. Whew! Hubby puts this battery in and the beeping stops. Now all he needs to do is go back up the ladder and attempt to get the alarm to hook back into its dock. Done, yay!

A small glass of milk to settle down and back into bed for some sleep before I have to get up to start cooking. All this while we were trying to be quiet also, because our daughter was asleep in her bedroom.

This story isn't over. 5:30 a.m....beep.....beep.....beep. No, not our bedroom, but the extremely dreaded stairway landing. Can you see the right-hand most dot on the ceiling. Yup, that's the smoke alarm. Hubby goes back outside for the ladder. I go back down to the basement for another battery. Now we have to turn on the recessed lights so Hubby can see what he is doing and move a small bookshelf that is hiding behind the quilt so he can reach the alarm. It is literally at the top of the staircase, so when Hubby is on the ladder he is directly above the two story drop. He gets it down, the battery is replaced and amazingly the alarm hooks back in on the first try. We woke up our sleeping daughter this time though. It is hard to set up a ladder on a hard wood floor quietly.

Hubby and daughter go back to bed, but it is so close to my usual wake-up time that I just stay up. All the rest of the alarms are at normal ceiling height and Hubby replaced the rest of those batteries so that we don't have another interrupted night.

The rest of Thanksgiving went smoothly. Mom joined us for dinner. 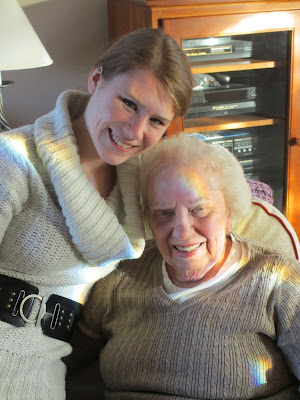 Here she is with our daughter, who is visiting for a few days from Boston.
We had our smallest gathering in our 30 years of marriage. 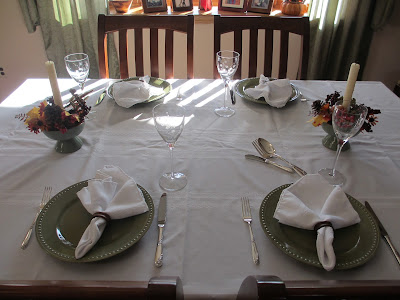 Not a very elaborate table this year. It is the company that counts.
I forgot to take a picture of the turkey, but I remembered the pie. 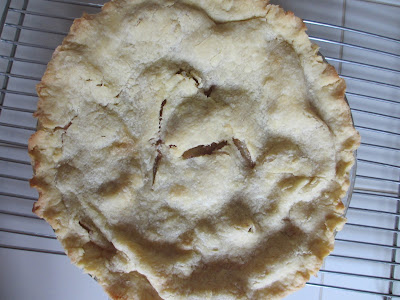 Although we were tired early, we had a really nice celebration.

View my complete profile
I am a 60 something retired math teacher. I spend many days creating and stitching my own cross-stitch designs, crocheting, quilting, knitting, and sometimes baking. I live on Long Island, NY with my husband.