I ended up with an unintended four day weekend due to the blizzard we had here on Long Island. My son had some extra time in Southern California as it took an extra day and a half before he could get a flight to New York.
Our back deck ended up free of snow, but one of our chaise lounges flipped over and the cover blew off of our table and chairs. 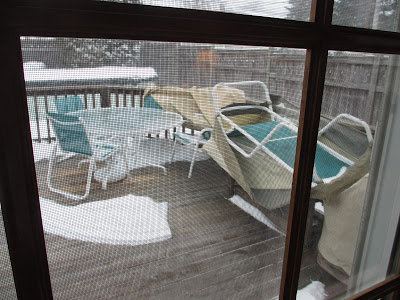 Our front porch had a nice drift. 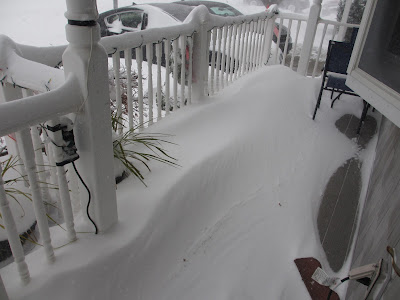 No snow on the cars, but a drift next to Hubby's car. 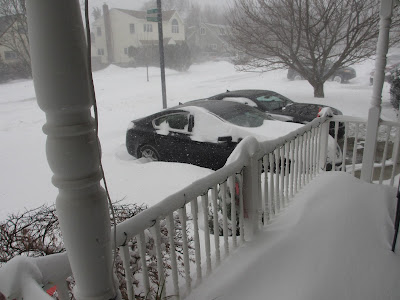 Of course that meant I did some some snow shoveling (our snow blower wouldn't start despite being tested prior to the storm).
It took a while to shovel through the end of the driveway. We had to go back out after dark once the plows came through a second time.

You can see how high the snow mounds are. We had over 12 inches of snow.

The two snow days also meant that I had time to take down almost all of the Christmas decorations.

Of course I was not going to waste two unexpected days off just doing chores. I sat down with Baker Beach for a few hours and made some real progress. 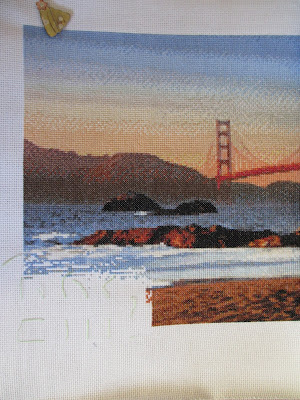 I also cast on this Milanese Lace Cowl (4 times) before I actually got the count correct and the pattern going. I have finished 2 of 8 repeats of the pattern. 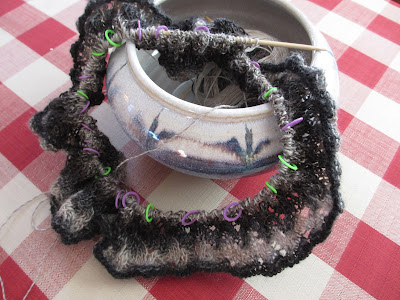 I haven't knit in a while and am really enjoying challenging myself with a lace pattern. It is surprisingly quite easy.

I am joining Kathy for some Slow Sunday Stitching. Pop on over to her site to see what other bloggers are stitching. I think that Baker Beach needs a little more love today.