I thought I would give you an update on my Halloween cross-stitch. Did you guess the holiday the last time you saw this? There is an awful lot of black to stitch. It gets monotonous sometimes so I am always switching to the orange, green or yellow. I leave white until the end if possible so it doesn't get dirty. 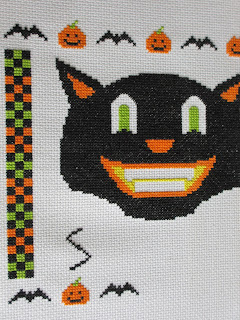 I am not sure why, but I have had to do an awful lot of frogging on this design. See the little pumpkin on the upper left, well I was busy stitching the pumpkin on the lower left when I realized they didn't line up. Wouldn't you know the top pumpkin, which was basically finished except for backstitching, was one stitch too far right. Also had to remove the entire right ear of the cat because I was one stitch off. Ugh, I rarely have this much trouble with patterns, and this one is my own!
Hope to finish this soon. Then I will be making it into a pillow. 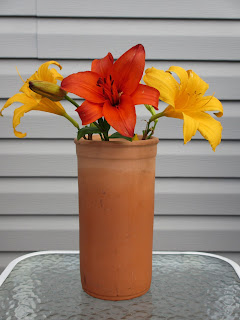 Want to wish my hubby a Happy 28th Anniversary! Wow, how time flies. Hubby was trimming some bushes in our back yard this week and a poorly placed rust-colored lily got in the way (someday I need to move it). Since he couldn't avoid cutting it, he added two other light orange lilies and put them in a pot. So pretty.
Thanks for stopping by!
Posted by CathieJ